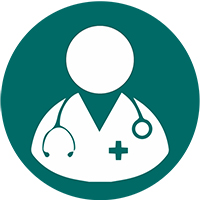 Location: Madhyamgram
Detachment of the retina is a condition in which the layer of the eye that is responsible for detecting light becomes detached from its usual location. Retinal detachment can cause vision loss. It results in a sudden loss of vision and needs to be treated as soon as possible. The only treatment available for this problem is surgery, and having the surgery performed as soon as possible will assist to restore vision. One of the few ocular emergencies that need prompt treatment is a retinal detachment. Early intervention is necessary. If you suddenly start having trouble seeing things, you should get medical attention as soon as possible from a retinal specialist. Following the completion of the diagnosis, your physician will discuss the surgery with you, as well as the benefits and drawbacks associated with the surgery. There are two different kinds of surgery for retinal detachment, each of which is determined by the patient's age, the condition of their lenses, and the kind of retinal detachment they have. The first method is performed from the outside of the eye, and involves placing a silicone band over the eye and then using a freezing procedure to settle the retina. The alternative method is a more complex surgery in which the retina is connected to the eye and either oil or gas is inserted to maintain the retina in place while it heals. In this location, laser therapy is used in order to heal the breaks. It's possible that you'll require more than one operation, and the outlook for your vision might not be very promising.

Surgery on the macula, which is the most sensitive portion of the retina and is located in the centre of the retina, is known as macular surgery. It is the region of the eye that is responsible for numerous critical functions, such as the sensitivity to brightness, colour, and contrast. Macular hole, epiretinal membrane, and vitreomacular traction are the three illnesses of the macula that occur most frequently and require surgical surgery. There is no surgery required for any of the macular diseases. When the patient's vision is impaired or they have distortions in their field of vision, however, we do surgery to remove the vitreous, which is a substance that is already present in the eye, and replace it with gas. In addition to this, we instruct the patient to lie on his stomach for the next seven to ten days. In addition to this, the patient should avoid flying for the next four to six weeks.

Diabetic retinopathy as well as screening : The number of people living with diabetes is highest in India. If treatment is not received, it can lead to significant vision loss. Screening for diabetic retinopathy is particularly essential since it allows for early detection of the condition, which helps in preventing more severe vision loss and allowing for earlier treatment. Due to the fact that diabetic retinopathy is a condition with relatively few noticeable symptoms, diabetics should get annual screenings even if the patient does not have any symptoms. When the condition is finally identified, the damage to the eye has already been done and the loss of vision is permanent and untreatable. Depending on the severity of the condition, diabetic retinopathy can be treated with a combination of laser treatment, intravitreal injections, and surgical procedures. Surgery is performed in order to put a stop to the disease, and the visual prognosis is often uncertain if the condition is identified at a late stage.

Age-Related Macular Degeneration, often known as ARMD, is a disorder that typically affects patients who are older than 60 years of age. The patients complain of a gradual deterioration in their vision, visual distortion, or a loss of vision in the centre of their field of vision. Multiple intravitreal anti VEGF injections are the primary treatment strategy for age-related macular degeneration (ARMD).

Occlusion of a vein: This condition is analogous to a stroke occurring in the retina and occurs when one or more of the blood vessels that supply the retina are occluded. Patients who have diabetes mellitus, hypertension, or hypercholesterolemia are more likely to experience this condition. Patients typically report having sudden vision problems, such as blurring or loss of peripheral vision. When a patient presents with vitreous haemorrhage or retinal detachment, the primary treatment modalities consist of intravitreal anti-VEGF injections and surgery.

High negative power is frequently connected with peripheral degenerations as well as holes and tears, and these can sometimes lead to retinal detachment. This condition is known as myopic degeneration.

Laser surgery is an option for patients suffering from a variety of ailments, including diabetic retinopathy and vein blockage, amongst others. Repair of a hole or tear in the retina can also be accomplished using this procedure. A laser is used by the surgeon in the same way that welding is used to surround the tear in the retina. This is done as a preventative measure to reduce the risk of more serious diseases, such as retinal detachment.

The disease known as uveitis affects the uvea, which is located in the central layer of the eye. It is an inflammation of the uvea that causes this condition. Patients who have uveitis typically have redness, significant pain, and a reduction in their field of vision. Uveitis can be a symptom of a much wider range of systemic disorders, including tuberculosis, arthrititis, HIV, and others. Patients of any age group may be affected, and it has the potential to impact both eyes. Uveitis is a potentially dangerous condition that can result in irreversible vision loss. A prompt diagnosis and treatment are essential for minimising the risk of complications and protecting your vision.

Eye damage, also known as ocular trauma, can be extremely damaging. There are two types of injuries that can occur to the eyeball: an open globe injury, in which the protective layer of the eye is ruptured, and a closed globe injury, in which the eyeball is not ruptured but there is significant damage inside the eye. In the event that the patient has sustained an open globe injury, they will require emergency surgery to repair the rupture. After suffering a closed globe damage, the patient's eye should be carefully evaluated to rule out the possibility of a retinal tear or detachment.

Patients will occasionally appear with a foreign body embedded within their eye. It is not necessary to remove any foreign bodies that are found in the eye. However, any foreign bodies present in the eye, whether they are formed of iron, copper, or vegetative matter, need to be extracted in order to stop any additional damage to the eye.

SCREENING AND TREATMENT FOR ROP: A disorder called retinopathy of prematurity has the potential to cause blindness in premature infants. It is imperative that all preterm infants undergo exhaustive screening in order to make a prompt and accurate diagnosis of the condition. This will allow for prompt and effective treatment in the form of laser therapy to be administered, thereby preventing additional damage. Several distinct sets of guidelines target the primary prevention of ROP by minimising exposure to risk factors such as oxygen, blood products, and systemic infections.

The fields of neurology and ophthalmology have been combined to create a super speciality known as neuro-ophthalmology. Neuro-ophthalmologists are responsible for the diagnosis and management of complex systemic diseases of the nervous system that affect vision, eye movements and alignment, as well as pupillary reflexes. This includes conditions such as multiple sclerosis (MS), Parkinson's disease (PD), and Huntington's disease (HD). Sometimes a far more serious illness, such as a brain stroke, a brain tumour, multiple sclerosis, or another similar condition.

Examining of the Retinal Tissue

Numerous studies are carried out in order for us to diagnose and speculate regarding the issue.

Book your Appointment with

Fill in the details below to enable us contact you instantly